Last week, I attended an evening of Australian wine and food tasting at Bibendum, one of the leading wine companies in the UK. The event took place at their headquarters in Primrose Hill, and a number of other food and wine bloggers were there to see what was on offer from down under.

Both Katnook and d’Arenberg had representatives on hand, who provided a good introduction to the history, ethos, style and terroir of their respective wineries, whilst Dan Coward from Bibendum gave a brief introduction to the other two houses (see below for some of his more creative efforts :)).

There was also a brief overview given of current trends in Australian wine-making from Lisa McGovern, the head of Wine Australia in the UK. One of the interesting points she made was that Australian wine shouldn’t just be thought of as ‘sun in a bottle’ anymore as there are a lot of cool wine regions in the country that are producing some really interesting wines – not just fruit-forward, sweet and easy drinking wines.

And there were indeed some outstanding wines within each wineries’ portfolios. I thought the following wines particularly stood out from the crowd:

The Katnook Estate whites on offer 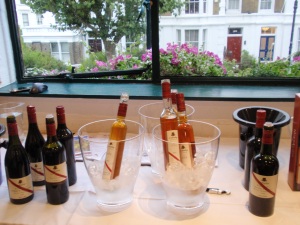 d'Arenberg's table at the tasting

I would also like to point out that Mrs. LF and I had a bottle of d’Arenberg’s ‘The Hermit Crab‘ the week prior to the this tasting, and absolutely loved it. It is a blend of Viognier and Marsanne (typical of the Rhone varietals that d’Arenberg likes to use), and at around £9/bottle it is one of the best value whites I have had in a long time. There are definitely tropical fruit notes on the nose, but it is a complex affair on the palate with well integrated wood characteristics, still a lot of good fruit on the mid-palate and quite a bit of length. It was one of the few times we have finished a bottle in one sitting on our own at home in a long time. After tasting it for the first time, I realized that Gary Vaynerchuk of Wine Library TV also liked it quite a bit (well, at least the 2007 vintage), giving it a 90+ score in one of his entertaining video reviews – see here.

But there wasn’t just Australian wine on offer – there was food too. And good food! Some great producers were represented at the event, and they included the following, all of which I had sadly never heard of before, and all of which are now firmly on my radar.

Wagyu, wagyu, wagyu…that is what immediately comes to mind when I think back on this event. Danny Russell, Sales Director from Freedown Food, was at the tasting and his Australian wagyu picanha beef (cap of the rump cut) was one of the most exciting things there. The beef was served on brown bread and was very well seasoned. It made an appearance every 15 minutes or so on a wooden tray (see photo below), after which it would be snapped up in about 5 seconds flat by the eager and excited food bloggers. It was so good, and was honestly some of the best beef I’ve tasted in a long time. It had been expertly prepared by none other than Aussie chef Brett Graham (who heads the Michelin starred kitchen at The Ledbury – see previous review here). It was to die for, and Mrs. LF and I grabbed as many of the little slices of heaven as we could without being classified as overly greedy by our fellow tasters. It is worth mentioning that Freedown Food sells a wide range of meats – including Wagyu beef, Grain-fed beef, Duke of Berkshire Pork, Venison, UK game, Wild Boar, South African game, Ostrich, Kangaroo, Bison, etc. – and supply meat to some of the best restaurants in the UK, including both Nobus, Wild Honey & Arbutus and Goodmans (the new American-style, Russian-owned steakhouse) – as well as Harrods and Harvey Nichols. 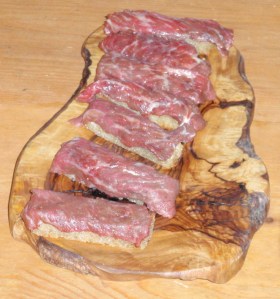 There was also a wide array of hiramasa fish on to taste (apparently, it is referred to as ‘kingfish’ in Australia most commonly, although this is a bit of a misnomer). The fish also go by other names, such as its technical one (Seriola Lalandi), yellowtail, ricciola, lechas, and many more. And just to make you really confused, it is also the cousin (or sister?) of one of my favorite fishes, hamachi. In any case, the fish on hand was fresh (not frozen) and was cooked in a variety of fashions. All of the dishes were excellent, with the fish being very fleshy, rich and sweet in flavor – you can learn more about it by going to the Clean Seas website, the company who provided it and sell it in the UK. Also of interest is the fact that the fish from Clean Seas is probably one of most sustainable there is as they use natural feeds, have minimal stocking densities and use site fallowing practices.

The various preparations of hiramasa fish available for tasting

The other thing I really enjoyed was tasting the Australian olive oils, of which there were many varieties. I have never knowingly tried oils from Australia and was impressed with the quality. In particular, I liked the Nolan Road ‘Robust’ extra virgin olive oil (pictured on the right below), which is organic and seems to be endorsed by Nigella; the Splish organic virgin olive oil ,which claims to go ‘beyond organic’ thorugh its innovative, recyclable and sustainable Tetra packaging; and the 3drops extra virgin olive oil, which was quite fruity and bitter and had a bit of heat.

Some of the Nolans Road organic olive oils I liked

All in all it was a very informative and fun evening, and many thanks go out to Dan and the Bibendum team for organizing it!

*Note: this was a free event open to members of the London Food & Drink Bloggers online community. The views are my own and there is no advertising going on here – just some good producers whose names I think should be better known.*

Be a stumblr on my tumblr

Flattr moi? Why thank you.

What Laissez Fare Writes About

Some Food Blogs I Read

Some Places I've Enjoyed (but Not Necessarily Reviewed)

Some Things I've Read (or Intend To)