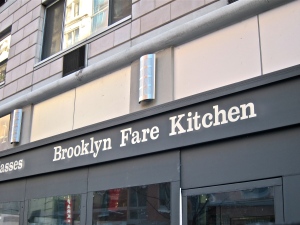 One of the best meals you’re likely to eat in the Tri-State area, served in relatively austere surroundings, with an atmosphere that changes depending on the particular make-up
of the diners on any given night. If you have an opportunity to go, don’t hesitate for an instant.

“That might just be the best meal I’ve ever had,” all of us were saying in our own way, the realization slowly creeping up on us, as we stepped back onto the nondescript downtown Brooklyn street after a staggering 3-hour performance.

I had tried to find the entrance to this holy grail of food fashionistas from inside the adjoining neighborhood supermarket … to no avail. My brother had, of course, realized that there was a separate entrance a few doors down. We were early, eager and — after peaking through the window of what is essentially an open kitchen with a D-shaped zinc bar for patrons to sit at on metallic stools — just a little nervous.

We still had about twenty minutes to kill. We stood outside; it was freezing. We tried the covered, heated area just outside the entrance; it was too warm. Eventually we put aside our fears (of disturbing the chefs’ prep-work) and decided to enter. 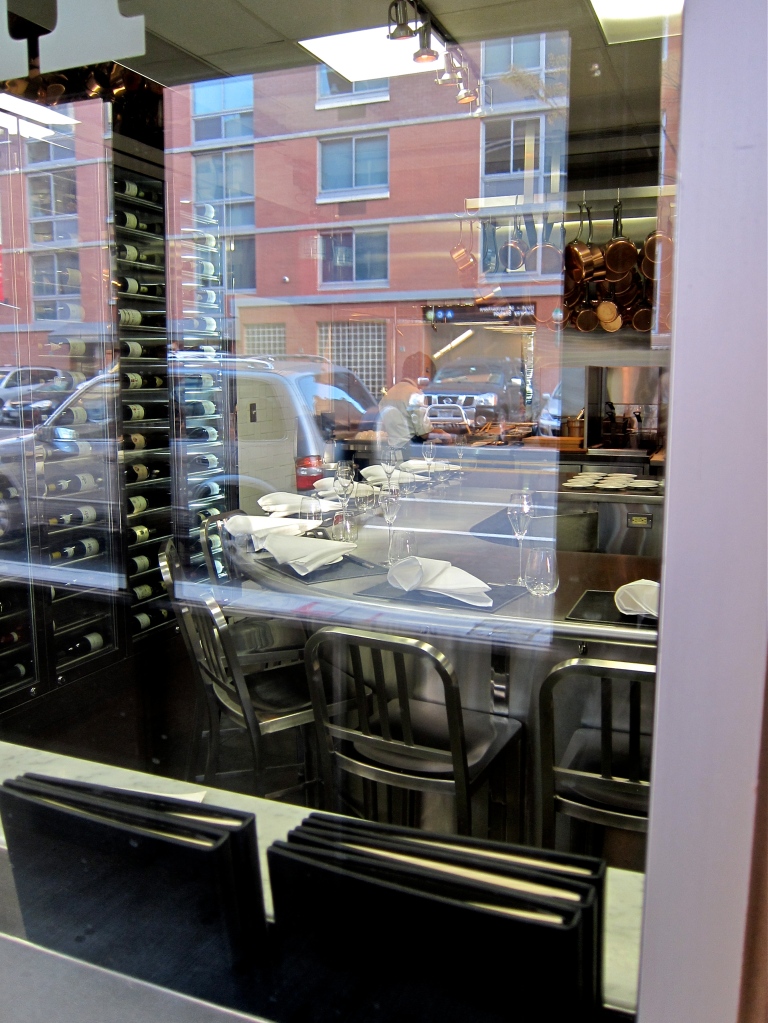 Peering inside across the mysterious void…

The one word that came to my mind during the first hour or so of sitting in this temple to pristine produce was ‘cold’ (despite the under-bar heating system pumping out way too much warm air). There was just something sterile about the place. It was, as Björk would say, “Oh so quiet.” There was little (if any) audible conversation between the chefs, or with their leader. And the chefs certainly didn’t say anything to us … much less acknowledge our existence.

Which was weird. After all, it had not been such an insignificant feat to get here. Dual-phone re-dialing weeks ahead (during a conference call!), prepayment for the entire food costs (not an insignificant sum for four people) a week in advance, the receipt of emails explicitly telling us what we may and may not do at the meal, and what we may and may not wear to this exclusive rendezvous.

I do have to say that the room is exquisite it its own way, though. It’s pretty much a perfect reflection of the ethos of the chef and his cuisine. No expense spared, seemingly simple, nothing a hair out-of-place. And you can’t help but dig the wine display cases.

But what of the food, you say? Well, as you probably know, there are no photos allowed, so I won’t be able to show it to you. And, given the sheer number of courses and ingredients, I won’t be able to explain each dish individually (you see, you are not allowed to take notes either … not that I ever do anyway).

The 20-plus-course affair began with a succession of what were probably the freshest, most beautifully prepared, and harmonious bites of seafood that I have ever had the pleasure of eating. The chef was kind enough to email me a picture of the ‘menu’ from his iPhone just as we left the restaurant, so you can see the main ingredients below, although it leaves much to the imagination (probably a good thing — no spoilers). 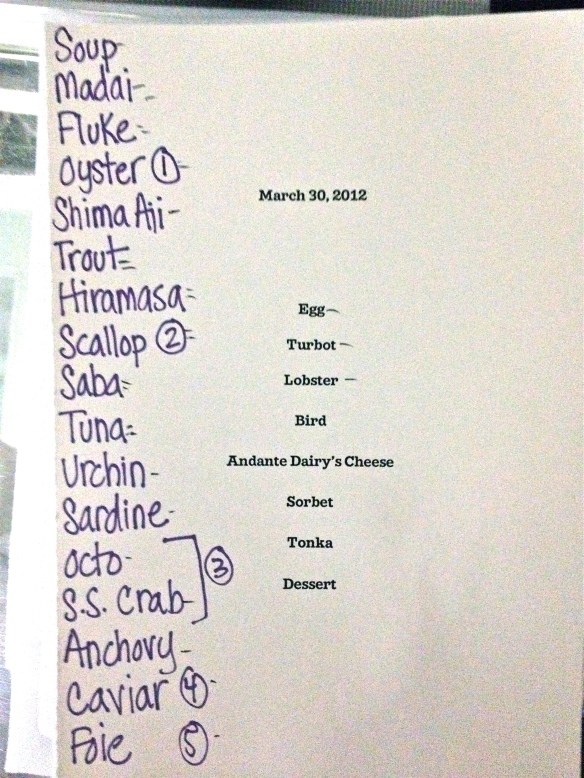 The ‘menu’ for our meal

If you know your dairy, you can see right on the ‘menu’ that the sourcing is impeccable as they carry Andante Dairy’s cheese, which is arguably some of the best in the country and rarely seen in New York (Ms. Scanlan’s operation is based in California). But I digress…

Each of the amuses was more or less a perfect composition — of art, of texture, of taste. Every time a new precious morsel arrived, it was immediately declared our new favorite, nearly every time. But it was still oh so quiet. We were each having our own little foodgasms inside our own little worlds, occasionally looking to our sides to confirm how mind-blowing whatever it was we just ate had been. It was mostly an internal dialogue, spoken in an atmosphere that seemed to call for reverence.

There is a very good explanation for why the seafood is really that good. You see, the adjoining Brooklyn Fare supermarket bankrolls the Chef’s Table. César explained after the meal that he essentially has an unlimited budget to get what he considers to be the best ingredients from anywhere in the world via the quickest shipping methods available. That is the most important thing to him: he must have the best ingredients. So the (mostly) raw seafood in our dishes was probably on par with what the diners in some of Japan’s top fish-centric restaurants were eating that very day (it seems that much of the seafood comes courtesy of Japan’s famous fish markets).

After mindfully consuming 10 or more of these minuscule masterclasses, I was kind of in shock. It was exactly what I had expected it to be, not far from perfection. But I still didn’t feel at home. None of us did. We felt exposed, disconnected from the people we had been staring at for the last hour.

I consulted the helpful sommelier*, and found out that the ‘proper’ meal had not even yet begun. This did excite me: it meant there was a lot more to come. The rest of the bar stools had recently filled up too. There was more interaction amongst the diners, and with the big man himself too. People were asking him questions, and by George, he was beginning to answer them, to a degree.

As if living out the Björk song in real life … “zing boom” … there was suddenly atmosphere, that most elusive of ingredients which help make a meal become truly memorable. As we ate — and ate — the mood lightened. Perhaps it was the wine, or perhaps this is the way it always is if you’re part of the Chef’s Table’s first seating, I don’t know. But we started flinging questions across the room to César and it seemed like he was beginning to enjoy the interaction a little bit more.

Based on all the reviews I had read, I assumed that the savory portion of the meal would be at least 95% seafood, so I didn’t even contemplate any other types of dishes ahead of time. Maybe I had missed something, but in retrospect, I am rather glad nobody had bothered to inform me how good the non-pescatarian food would be. These dishes alone were worth a couple of Michelin stars.

But the truly shocking thing was the desserts. I don’t think there is actually a pastry chef at the Chef’s Table, but if there is, he or she deserves to be recognized. These were some of the best I’ve ever had.

One of them, a spiced tonka bean sorbet with dark chocolate sauce, was delivered with what may be the most (unintentionally) hilarious pronouncement in my dining history. The waitress brought us each our dessert and recited what she and her colleague had just synchronously placed before us. “Tonka bean sorbet, chocolate sauce…” and then she turned her shoulders and walked away. Within a split second she realized she had forgotten to inform us of a crucial ingredient. She did a rapid about-face, looked us squarely in the eyes, and with a solemn whisper said, “…and gold.” Then she promptly went about her business as if she had said something as innocuous as “…and caramel.”

For whatever reason, that set us over the edge. We were talking about gold well into the night — “I only eat gold,” “Oh you’re so low-class, how crass, I don’t eat gold, I only drink it,” and so on (for some reason, all adopting ridiculous British accents as we made our increasingly ludicrous proclamations). We were drunk, in every sense of the word. Drunk with drink, drunk with food, just perfectly drunk in the best way that drunk can be.

So, what had begun as something unnervingly cold, kept improving, and eventually turned to gold.

Though what I wrote at the beginning was true — none of us could find much fault with any of the food we’d been served and, in the end, it had become a fun meal too — strangely enough, I haven’t thought back that often about my meal at the Chef’s Table at Brooklyn Fare. For some (as of yet) unknown reason, it just didn’t make as big an impression on me as some other restaurants have — say noma, for example. Part of this may be due to its location (which of course is not the restaurant’s fault). Because I live in the New York area, it is not a ‘destination’ restaurant I have to travel across oceans to visit, where English is not the first language. Such anticipation, and investment, can have a huge impact on your psyche.

Despite my own lack of a certain nostalgia for the meal, you would be hard-pressed to find better food in New York City, the Tri-State area, and possibly the entire country. Sure, you might find a truly spectacular dish or two, here or there, that could hold its own with César’s cuisine … but likely not in such a measured procession and with such consistently wrought perfection.

If you have the opportunity to eat at the Chef’s Table at Brooklyn Fare, do not hesitate for an instant.**

In closing, I think the Björk song I have been citing is a perfect expression of my time at the Chef’s Table at Brooklyn Fare***:

it’s. oh. so quiet
it’a oh. so still
you’re all alone
and so peaceful until…

’til it’s over and then
it’s nice and quiet

* The Chef’s Table at Brooklyn Fare was originally BYO-only. They recently got a full liquor license and now have a proper wine service. The wine list, from memory, is quite good, and there are some reasonable values from some of the lesser vaunted regions of France. We went through a lovely bottle of Champagne (Chiquet Blanc de Blancs Grand Cru d’Aÿ) for the amuse bouches, then an excellent white Burgundy (Jobard Meursault ‘En la Barre’), and a stunner of a Rhône red (Chave St. Joseph). It seemed more economical to drink three bottles rather than having them try to construct some type of pairing, which they didn’t seem to encourage.
** As you may have read, there are plans afoot to open a second Chef’s Table in Manhattan. Despite how counterintuitive that sounds (i.e. wouldn’t they then have to be called the Chefs’ Tables as not one chef can be in two places at the same time?), César informed us that the Brooklyn location is his “baby” and he still plans to be there the majority of the time, possibly five nights a week. I don’t much see the point of eating at the Chef’s Table when he is not “the Chef,” but it would be unfair to criticize something before it has even had the chance to open. Best of luck to them…
***My brother and I shared this meal with Mathilde and David, and their account of the meal can be found here.

*Note: I have only dined at the Chef’s Table at Brooklyn Fare once; our party paid for the entire cost of the meal; we were not given any ‘extras’; and were not knowingly known by the house*