Dishoom purports to be London’s first authentic Bombay Café. There is certainly some potential in the food, though based on my visits, there seemed to be issues with consistency at this early stage. It is not the type of place that would ever totally blow my socks off, but it could develop into being a good middle-of-the-road Indian restaurant with a twist. Given the time & money they are spending on their image & branding, it certainly appears as if the idea is to roll these out across the town, and the country for that matter, but only time will tell. It is certainly a pleasant space & if the present issues can be resolved, it’s not a bad venue for a jovial meal if you’re in the area – but nothing more than that, in my book.

I found out that my friend @mathildecuisine was having lunch near my office. She happened to be dining at Dishoom, an Indian restaurant on the restaurant row that Upper St Martin’s Lane has suddenly become. It had just recently launched – hey, another day, another restaurant opening in London – and I figured it was a good excuse to try it. I only found out at the last minute that she was going to be joined by recently retired food blogger extraordinaire @foodieguide. I politely asked if I could crash their little party and become a lady who lunches too, in a matter of speaking of course, and was pleasantly surprised that the answer was ‘yes’ on such short notice.

I actually used to work within about 10 seconds of the restaurant, and was slightly perturbed to see that there are now a bunch of new places sprouting up in the immediate vicinity which weren’t there when I was. But I’m still only a short walk away, so it’s not the end of the world.

What time is it? Lunchtime, silly.

Dishoom looks attractive from outside and, given the fact that it has an all-window shell, you can easily see in to get a sense of the dining room as well. Once inside, it’s all black metal, dark wood, marble and brass. It is tastefully done, and it has a nice vibe once it is full with patrons. 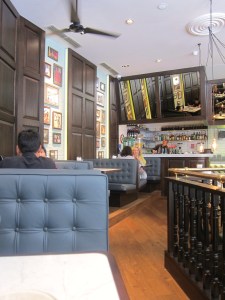 There has been a lot of comment amongst the twitterati about the Bollywood-style pictures and mish-mash of memorabilia (the accusation being that they’re of the cookie-cutter faux variety), but @kristainlondon (who is currently reinventing her virtual identity since having recently moved to Chicago) knows someone who knows the owners and apparently it is either mostly or all their own personal photos and artefacts. They must have one glamorous lady in the family, that’ all I can say. Whatever you might think about the authenticity of the decor, there is definitely attention to detail (check out the female loos – not that I did of course) throughout.

Anyway, I arrived to find my fair ladies already there, so we got down to the business of ordering pretty quickly.

We ordered a few small plates and a few mains and, being food bloggers (or at least retired ones), we were naturally going to share and make sure we tasted everything.

First up was a little snack to tide us over until the proper food arrived. They were advertised as being “handmade and tangy” on the menu, and while I assume the former is true, the latter descriptor was definitely apt. While I started out slow (a crisp here, a crisp there), they soon became rather addictive and I felt like I was eating more than my dining companions, which was especially rude given they are both such elegant ladies. An LF FP (faux pas) to say the least. Pardone moi! 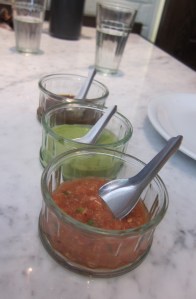 The crisps came with a trio of chutneys but for some reason I opted not to sample them, so they just sat there looking pretty. Is it just me, or are other people often confused about which chutneys are supposed to go with which dishes? Oh right, so it’s just me then.

We did however delve into our liquid trio of lassis: mango & fennel, rose & cardamom, and a salted plain one. I had the mango & fennel lassi, which was perfectly passable, though it wasn’t thick or creamy enough for me and could have had a bit more mango flavour running through it. I wasn’t blown away.

The menu informed us that the calamari would be served “with zesty lime and chilli.” There must have been quite a bit of sugar (or some other sweetening agent) in them as well, because it was rather sweet overall. I didn’t mind this so much as I have a natural disposition toward sweet things, but while the lime and chilli were there in the background, the flavors could have been a little better balanced. That said, they were perfectly crispy on the outside and soft on the inside, without the taint of rubberiness which so often blights poorly cared for calamari. 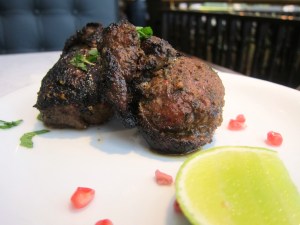 We had ordered two lamb dishes which sounded very appetizing from the menu descriptions. The first I tried was the spicy lamb chops, which were meant to be “rubbed with crushed black pepper and chillies.” It certainly looked like they would be tasty. The problem here was that the chops themselves had been woefully overcooked, leaving them with a literally leathery toughness. Therefore, while they had been well marinated, the dish was not really worth eating.

Unfortunately, our silence on the lamb continued with the lamb boti kabab. These cubes of lamb had a reddish hue and smelled delicious (if that’s possible?) but were insanely dry and chewy, therefore leaving us devoid of pleasure from our second main course in a row. The menu said it was meant to be “juicy spiced mince lamb with cumin and lime.” Well, they were certainly not juicy, although they were spicy, and I suppose there was some cumin and lime in there somewhere, but all I can remember is the dryness of the lamb itself.

It should be noted that other people I know who had the lamb dishes at Dishoom in the opening weeks said that their meat had been better cooked and was not at all tough, so maybe this simply points to the inconsistencies of a new kitchen.

Luckily, a hero turned up to save the day, in the most unlikely of guises. Who would have thought “chicken tikka” at an Indian restaurant trying to stand out and be different would be the dish of the meal? Well, I can confidently say that, along with the calamari, it was one of the two best things we sampled. The meat itself was serenely succulent and the ginger and chilli (both green and red) flavours came through beautifully. It was zesty and meaty at the same time; an excellent dish.

Foodie Guide had ordered some of the house black dahl, and it never turned up. She reminded the waitress about it a bit later, whose response was, “Oh, do you still want that?”, to which she replied with a pretty perturbed “Yes!” It arrived shortly thereafter and it was different, that’s for sure. It had a very rich and sweet tomato flavor, which was not exactly what I was expecting given the normal yellow lentil dahl I’m accustomed to eating. I liked it though, even if it was a tad too sweet, sort of like the calamari. As we were engaged in conversation at that point, I forgot to take a picture of it – another LF FP.

For a mixed bag of a meal, luckily the damage to our wallets (and purses) wasn’t all that severe, with nothing tipping the £10 marker.

I would add “no overcooking of lamb” to the café rules

As we didn’t opt for dessert – they were “being good” you see – I headed back to Gino, a new-ish gelato place I had walked by on the way (well, it wasn’t really on the way, but who’s checking) to sample some of their frozen fare, and was pretty satisfied with that ending to the meal.

Ah, but wait, the story doesn’t end there. There is a brief breakfast addendum.

You see, Dishoom’s tweeter told me to come in and try their breakfast and chai. I promised to do so, and did. For sake of clarity, I paid and was both unannounced and anonymous. When I turned up, there was an army of people (they looked like consultants and/or PR people…and I should know) holding all kinds of meetings with the people I presumed to be the owners/managers. I slunk off to an empty booth – actually the whole place was empty and I think I was the only paying customer there for a good while.

I must say I found the breakfast menu to be slightly odd. I don’t know everything about Indian food and culture, but I do know a bit, and I would question how authentic a breakfast of porridge, cinnamon rolls or granola is for a “Bombay Café.” In any case, I went for the more Indian-sounding stuff. 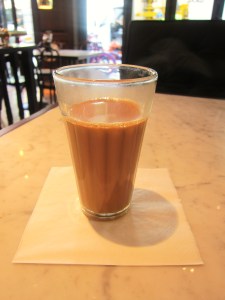 I duly ordered a cup of their house chai, and it arrived in a dainty glass. It was pretty good. It’s definitely not the best I’ve had, but it displayed a nice texture (I prefer it to be a tad creamier) and good spicing. I had to add a bit of sugar to get it to the level of sweetness that I prefer. 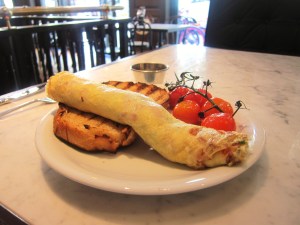 The Bombay Omelette arrived in cling-wrap roll form, hunched over a marvellously grilled piece of toast, and accentuated by the crimson of some vine tomatoes which had also been grilled. The omelette was well cooked and hid a wealth of spices in its central core. D*mn that thing was spicy, but it was the kind of spice I kept wanting to eat more of, so that was a good thing. (Maybe it’s no coincidence that the dish’s acronym is BO?). The tomatoes were sweet and the bread was, well, bread, and I thought it could have used a touch of a sauce to alleviate what was a rather dry plate. Looking at the picture now, I guess I could have had the tomatoes and toast together, but I wasn’t that clever at the time. I did add a touch of ketchup to the omelette every now and then – I am American, after all – which I thought in this case actually worked.

So breakfast was pleasant and, given they have free Wi-Fi, you could presumably work from here for a good part of the day without too much trouble (or expense) – though I’m not sure how they’d take to that!

Overall, I guess I sort of like Dishoom. It’s not the kind of place I’d travel across town for, but given it’s within about a five-minute walk of my work, it is the type of restaurant I’d frequent on occasion. They also have a downstairs, which wasn’t open during my meals. It seems quite cavernous and could alleviate the waiting that diners apparently often endure in the evening due to the no reservation policy.

It certainly appears as if Dishoom is taking its image, branding and corporate reputation very seriously and that his is a template that could be easily copy and pasted across the town, and the country for that matter. So maybe that’s the plan. My only reservation (pardon the pun) would be consistency, as with all chains of whatever size. Even if they can manage to sort out the consistency in their original restaurant, it is a whole new ball game once there are multiple sites.

*Note: I have dined at Dishoom twice, once for lunch and once for breakfast.*

20 thoughts on “Dishoom – Not Quite Va-Va-Voom”