First of all, I would like to wish everyone a Happy New Year, and I hope you had a great and relaxing time over this holiday season. Sorry that I have been a little bit slack in updating the site in the last month or so; it has been a very busy time at work and I was essentially offline for two weeks during the holiday period. There are many meals from 2009 that I am still planning to write-up (so bear with me), and I also have many exciting plans for 2010 (so stay tuned!).

I would also like to thank everyone for their support and encouragement during the first 6 months of this blog – it has been great to hear your thoughts and comments and also to meet some fellow bloggers. One of my New Year’s resolutions is to make my reviews more concise, so let me know what you think as I continue to evolve the format – all feedback is welcome. For very special and/or interesting occasions, I will probably keep to the fuller format, but for others I will try to pare things down.

In that spirit, enough rambling…onto the food…

Mrs. LF and I had been in the mood for some Middle Eastern fare for a good number of days, when up popped an email in my inbox inviting me to review a new Lebanese restaurant in Knightsbridge. I figured what the heck, and asked the restaurant’s PR agent to book us a table. So, please keep in mind that we did not pay for this meal.

Laya’Lina is a modern Lebanese restaurant located on a cute little street off Knightsbridge. It serves up capable Lebanese fare, so if you're in the mood for this type of food and somewhere nearby, by all means go. There are a few dishes which would seem more at home on a Chinese menu, but maybe that is their take on 'modern' Lebanese?

We arrived on a chilly November evening, and weren’t sure where to enter through the door that seemed to lead straight into the restaurant, or to enter through the bar, which seemed to be the proper entrance. We chose bar entrance, and were led to our table in the ground floor dining room. First impressions were that of a very modern restaurant, with shiny black floor tiles, black tables, and bright blue accent lighting. There was also a little bar on a raised mezzanine level in the back of the ground floor dining room. All of the surfaces are quite hard and angular, and I thought it could do with a bit of softening somehow, especially for acoustics – although it was fairly empty, so this wasn’t a problem on our visit.

Later in the meal, as a procession of middle-aged people dressed to the 9’s began to arrive through the door that enters straight into the dining room (we figured this was the ‘regulars’ entrance), we found out that there was also a downstairs dining room which was mainly used for private events (i.e. live music and belly dancing; more information is available on their website). There was apparently a big shindig that evening to celebrate Eid al-Adha.

The waiter who wouldn’t wine

We eventually decided to go for lots of mezzes and to share a main course. Being quite into Lebanese wines these days, I had looked at the wine list ahead of time and was pondering ordering one of the two really excellent local wines they had listed. When I asked our waiter a question about the Lebanese wines on the list, he replied by saying, “I’m sorry Sir, I don’t drink myself, so I can’t really tell you anything more about the wines.” I didn’t say anything at the time, but Mrs. LF and I agreed that irrespective of whatever one’s personal consumption happens to be, if you are a waiter in a restaurant that serves alcohol, you (or one of your colleagues) should at least know some basic information about the alcohol you are serving. It’s fine if you don’t want to serve alcohol in your establishment, but if you do, you have to expect people will ask you questions about it. Also, it’s a shame because there is a lot of good Lebanese wine, and it should be talked about more (beyond Chateau Musar).

In any case, as Mrs. LF decided she would not be partaking in the alcoholic consumption that evening, and as I felt guilty ordering an expensive bottle for one person (since I wasn’t paying), I opted for the Lebanese wine they had by the glass. It was a 2005 Clos St Thomas, Les Gourmets (£4.95/glass) and I was happy enough sipping on it throughout the meal.

In the meantime, we had been plied with some very tasty green and burgundy olives.

We were quite happy munching on these well marinated beauties, but we didn’t have to wait too long before our mezzes began appearing.

The cold mezze plate was really good. The Baba Ghannuge was packed full of rich, smoked aubergine flavor and the tahini was well balanced and came through well also. It was finished off with the traditional sprinkling of pomegranate seeds, which really complements the richness of the dip (7/10). The Muhamara (a crunchy dip of lightly spiced pureed nuts), which I don’t remember having before, was also excellent (7/10). The stuffed Vine Leaves and Tabouleh were both perfectly fine, but not better than those I’ve had at other Lebanese restaurants (5/10).

The vehicles for the dips

The accompanying pita and flatbread was also good.

In fact, since there was some bread left and we both fancied some yogurt, we ordered some of their Jaigik (yogurt, cucumber and mint). It tasted okay, but it was too watery for both of us; we prefer this type of yogurt dip to be much thicker and unctuous. 4/10.

We had also ordered a trio of hot mezzes, which came at around about the same time.

The best of the three was the pastries filled with cheese. They were sufficiently crisp on the outside, and the cheese had a lovely texture and seemed very similar to feta cheese to us – it certainly wasn’t bland and boring – having a rather pronounced flavor which we both enjoyed. 7/10. 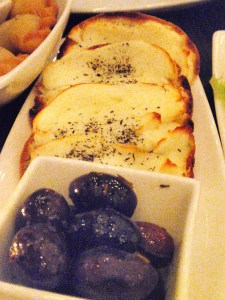 I liked the idea of the Halloumi pizzas, and they were well executed. The cheese wasn’t too chewy (which can happen if it’s grilled and let to stand for too long), and the base of Lebanese bread was very good. I guess this is a Middle Eastern take on the English ‘cheese on toast’ :), although I’m betting that theirs probably came first. 6/10. 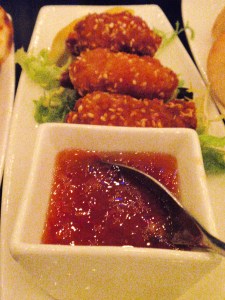 Okay, so here is the one really strange thing during our meal. I am no expert on Lebanese cuisine, but I would hasten to guess that prawns deep fried in sesame batter and served with a sweet chilli sauce is not a traditional dish (?!). In fact, it seemed distinctly Chinese to me. It wasn’t that good, as the shrimp were simply too dry and rather tasteless (probably indicating they were frozen), and just didn’t seem to be Middle Eastern food. Sure, shame on me for ordering them, but I was curious – I mean, I’ve never seen that in a Lebanese restaurant. Strangely enough, as Mrs. LF and I were discussing this issue, I happened to finally notice what had been staring me in the face: the wallpaper in the staircase (see below). How else could you describe this pattern besides ‘Oriental’? 4/10. 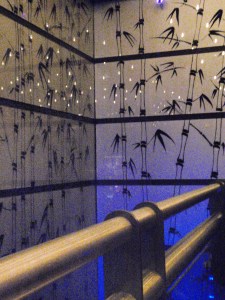 Maybe this was what the owners of the restaurant meant by a ‘modern’ Lebanese restaurant – the ‘modern’ indicating an integration of other cuisines into their menu? I have no idea, but we both thought it was really odd. In any case, we were sufficiently satisfied that our main course would be more what we were expecting.

The main course of Lamb Paupiette was excellent. The rich tomato sauce really shone, and the mince meat was very well-flavored. It was a hearty and satisfying dish that was exactly the right size for a main course. Although we shared it (due to ordering a lot of mezzes), it would have been perfect for one person. The basmati rice was also good and the correct texture. 8/10.

Although we were both pretty full, we still had room for something sweet. I decided to go for the House Dessert, which apparently changes each day, while Mrs. LF decided to have some Baklawa with our fresh mint tea. 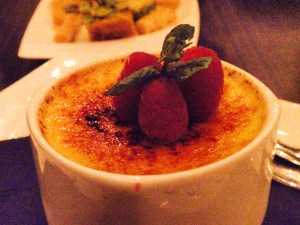 This evening, it was a raspberry crème brûlée, and I enjoyed it a lot. Well crisped on top, it hid a secret layer of raspberry goo at the bottom of the pot, which when mixed with the cream was a formidable combination. Again, not really classically Lebanese so far as I could imagine, but at that point I didn’t really care. 6/10.

The Baklawa was a bit of a let-down. They were quite hard and nearly all of them seemed to be stuffed with pistachio, so lost interest after the first bite or two. These could be improved as we’ve had much better Baklawa in other restaurants – of course the best if buying it fresh from a specialist. 4/10.

A welcome addition to the neighborhood

We generally enjoyed the food at Laya’Lina. The Lamb Paupiette, Cheese Sambusak, Baba Ghannuge and Muhamara stood out as being particularly good, with the rest being exactly what you expect from a decent Lebanese restaurant, but nothing extraordinary (save, of course, for the deep fried prawns with sweet chilli sauce). The ambience was a bit strange, as it felt a little too ‘modern’ in the sense that the surfaces were all hard and shiny and it didn’t exude any warmth (and it was cold outside, man!). The staff were all perfectly nice and professional, and besides the incident with the wine the service ran pretty smoothly, although I think we weren’t the main focus after the large party began arriving for the downstairs function.

In sum, if you are in the mood for Lebanese food, and happen to find yourself in or near Knightsbridge, by all means go – but I wouldn’t recommend going really out of your way to go to Laya’Lina. That said, I bet the downstairs scene is a bit more vibrant when the belly dancers and/or live music is going.

Wine: a good selection compared to other Lebanese restaurants I’ve been to in London, with a few particularly excellent bottles of Lebanese wine (though at the higher price points)

*Note: I have dined once at Laya’Lina for dinner, and the meal was complimentary.*