Pearl is a feast for the eyes – the interior is very attractive (if a bit corporate) and the food is presented beautifully. Unfortunately, on my first visit the flavors were generally muddled, imprecise and didn’t create something memorable in the mouth. While not a disaster, I certainly haven’t had a burning desire to return in the few months that have elapsed since my meal there.

Thring for my Lunch

I must say at the onset that this is quite a belated post. It was one of those meals I wasn’t sure if I should write up (hint, hint), and has been in my back-log of posts for ages. For whatever reason, I’ve decided to do a little piece on it now.

I was quite excited about this meal, as I would be dining with fellow food blogger Oliver Thring (@oliverthring), whom I had met briefly a few weeks earlier at the a screening of Julie & Julia (see his review of the movie here). After a bit of tooing and froing, we eventually decided to lunch at Pearl by Jun Tanaka, as it was strategically positioned smack bang in the middle of our work places, and as I had followed Tanaka’s career for a while and always wanted to try his food. 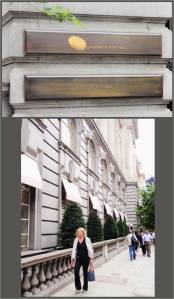 Ollie turned up and we entered the rather empty restaurant. We were promptly led to a nice little table in the back corner and I thought it was quite a pretty space overall, though despite their best efforts, it still retains that part-of-a-flash-hotel feeling. 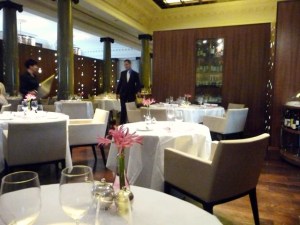 The view from our little enclave (photo courtesy of Oliver Thring)

The menus soon arrived and a lot of it sounded appetizing and interesting. It was my first proper meal with another food blogger, which was great because it turned out that we were both very happy to share and try a bit of each other’s dishes.

We decided to have some wine by the glass with our meal and I was a bit shocked to see that only one of the reds and one of the whites were under £10/glass. Having dined at many hoity-toity restaurants as of late, I can’t remember seeing this anywhere else and really don’t consider it good form.

Compounding the problems in Pearl’s wine department was the fact that Ollie’s glass of Gruner Veltliner (£11/glass) was definitely corked. Now, there’s nothing wrong with a corked wine, but I would say that (a) the sommelier served the wine to us in a full glass – implying he had tasted it and was okay, otherwise he should have asked us to do so – and that (b) I don’t think it was the first glass they had served of that bottle, which is all the more unsettling. Wine diatribes aside, the food was coming and it certainly looked appetizing.

Sadly enough, given the tardiness of this report, I can’t remember what the heck the amuse bouche was or what it tasted like. I thought I’d include the picture that Ollie took anyway just to confuse you.

I was justifiably excited about my starter. I mean, just read the description, and then look at the presentation – so bright, colourful and elegantly served. Unfortunately, it really didn’t hold up to what it had promised visually. The beetroot flavor was overpowering and there was almost no hint of venison to be tasted. While the fruits looked nice, they also didn’t quite fit in and the whole thing kind of merged into something that was pleasantly edible but not particularly tasty or memorable. Sigh. 5/10.

Déjà vu with Ollie’s starter: it looked the business but failed to deliver in the flavor department. I must say that from the bite I had, the pasta had been perfectly cooked and the golden egg yolk spilt out perfectly upon being broken with the fork (a trademark of this dish). I just wish there had been some oomph to it. If I am being kind, I’d say that its subtlety and cleverness were lost on me, but this was a growing trend and I was beginning to think that nothing would stand up and grow some balls. 6/10.

The mains came and they were two more lookers. Actually, looking at them now, they were very similarly presented. My dish of Cornish plaice was again pleasant and slightly better than the preceding dishes, though not by much. The little chicken wings were by far the winners, and the veggies were flavorsome, but although the fish had been delicately cooked, it was all just rather ho-hum. Nothing was out of step, but nothing enlivening my taste buds either. 6/10.

I got a taste of my companion’s main, which was a good deal better. The pork was really well cooked – moist and full of flavor. The little sauce had a nice zing of acidity, which held everything together. The textures worked too, with the pasta and beans offering chew and the greens providing crunch. I was finally happy, and Ollie was kind enough to offer me have the rest of his dish. I politely declined once, but when he insisted I didn’t say no a second time. 8/10.

After being offered a glimmer of hope, things were looking up for the puddings. For reasons I cannot now comprehend (20/20 hindsight, I suppose) , we both went for the same dish for our last course. Very un-foodblogger like of us indeed. Architecturally speaking, it was little short of a masterpiece. But we were back to the beginning of the meal with the flavors – nothing to write home about. Pretty, pleasant, platitudinous. 5/10.

Beauty but no feast

The name of the restaurant reminds me of our recent honeymoon, part of which was spent in beautiful Bali, where we went to one of the local pearl factories along the northern coast of the island. We learned that while pearls are ‘natural’, as a round sphere is stuck into the inner tissue of a mollusc and then gestates in the sea water, it is in reality something created by man for man to appreciate. This is much like food, in that we now often grow, manufacture or artificially farm the specific ingredients we wish to eat, although the growth that takes place is of course ‘natural’. In both instances, it is rare to find a pearl/food that truly stands out from the ordinary and captures your imagination. In this instance, the Pearl that rested inside the shell of the Renaissance Chancery Court was certainly beautiful to look at, but when you took it out and examined it more closely, and then laid it next to some other beautiful pearls, it began to fade into the crowd and became a bit average, a bit banal. 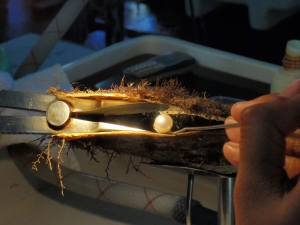 Yes, the food Jun Tanaka’s restaurant, while technically well cooked, tasted pretty average. The service was professional but a bit soulless. There were certainly some nice design elements lurking about, but the overriding feeling was that you were in a posh hotel. The combination of this led me to come away from the restaurant with a slight sense of disappointment and no real urgency to give it another go. This was saved however, by the stimulating and jovial company of a fellow food blogger, with whom I much enjoyed talking about what I love talking about best.

Wine: too expensive by the glass, plus my dining companion’s glass of wine arrived fully poured and was corked, indicating it had obviously not been checked beforehand by the sommelier.

*Note: I have dined at Pearl by Jun Tanaka once and it was for lunch.*