For me, there is nothing to dislike about Le Caprice. The food is classic and well executed, the dining room is pleasantly monochrome and art deco, and the service is professional and friendly. The pre & post-theatre menus also provide tremendous value for money.

I had planned a little surprise for the missus a few months ago. She had never seen a certain West End musical fixture and hinted that she would indeed like to see it someday. So I booked some tickets and then had to decide where we could have a quick but nice meal beforehand. After a few minutes, the answer was staring me straight in the face. There was only one choice.

You see, last year a business partner had taken me out for lunch to Le Caprice, which was only a few seconds away from my old office. It was the first time I had been to the restaurant (or any of the establishments within the Caprice Holdings portfolio, which include such stalwarts as The Ivy, J Sheekey and Rivington Grill), and I was quite impressed. The menu had been very simple, but the food had been exceedingly fresh, well prepared and had left a very favorable impression in my taste buds’ memories (how long do taste buds live anyway?). I particularly remembered that the fish had been excellent. So I booked a table online and forgot about the whole thing, until a few Fridays ago, when the evening had arrived.

Having opened its doors in January 1946, Le Caprice has been a London institution for a long time now, and has always enjoyed a consistently good reputation. It was originally one of the few really good restaurants in the capital, serving many celebrities and stars, and has managed to continue pulling its weight over the decades by most accounts. The talented Mark Hix became head chef around 20 years ago, before going onto run the kitchens of all of Caprice Holdings’ restaurants – a position he left in December 2007 in order to follow his own ambitions (see his new group’s website here). Given all of this history, and the fact that I had a very good meal there last year, I was really looking forward to revisiting Le Caprice and hopefully giving Mrs. LF a very pleasant surprise.

Our reservation was for 5.30pm. I know, I know. Quite early, but I hate feeling rushed during a pre-theatre meal, and wanted it to be a nice, leisurely affair. We were not surprisingly the first people to arrive, so we didn’t have the fanfare of the bowler hat man opening the door for us (he actually walked in right behind us), and the empty restaurant was certainly not the lively scene I remembered from my previous meal at the bar counter (which serves the full menu and is a great option to try if you haven’t booked).

We were seated at a nice table against the wall, from where we could survey the silent and pristine monochrome glory of the dining space. The restaurant is arranged in an L-shape and has a very classic and slightly art deco decor: black chairs with wicker backings, crisp white linen and black & white photos of the famous and infamous which are full of character. (I do have mention that there are some very odd looking fake lily-esque flowers hanging from the ceiling at both ends of the bar, which is the only thing that seems slightly off). Overall it is a very pleasant space, but it was understandably a bit dead with just the two of us there with the waiting staff! Speaking of the staff, they were all dressed immaculately in black in white, and at first impression they came across as being, warm, friendly and professional.

All the time in the world

After being seated, we were presented with a basket of bread accompanied by a small plate of butter. The bread had just come out of the oven, and we were given a few white and brown pieces of a rather thick baguette. The white bread was very crusty and was outstanding. We were so impressed that we asked our waitress if they make it on the premises. She explained that all of the dough for Caprice Holdings is made centrally, and then it is transported to each restaurant where it is baked fresh for each service. The brown was also nice, but it was the white that really stood out.

We perused both the à la carte and pre-theatre menus and the former seemed very promising, with three choices for starters and mains (one vegetarian option in each) and the option of two desserts or cheese afterwards. The price also seemed very reasonable, so we took the bait.

Eventually, we decided on a half bottle of Pouilly-Fumé (a 2007 ‘La Charnoie’, Domaine Patrick Coulbois at £24) to go along with the meal as we were both having the fish main course. As the waitress was waiting for me to give her the okay on the wine, I remarked to Mrs. LF that it had one of the hallmarks of a Pouilly-Fumé on the nose – it smelled slightly of cat piss. The waitress heard me too, and seemed a bit shocked and slightly concerned for us at this revelation. But we explained that this was a completely normal thing to smell and that there was nothing wrong with the bottle. It was very cute at how concerned she was, though :).

Not too long thereafter, the first courses arrived, which was good as we were both hungry.

Mrs. LF wanted something light to start with and, as such, opted for the salad. While she said that it contained nice fresh endive and fennel, she pointed out that there was not enough pear, which threw off the balance between bitter and sweet. She also said that the dressing just didn’t stand out for her, and I quote: “It missed that kick that you need from the dressing, which is the only thing that can make a simple salad like this really stand out in your memory.” 5/10.

On the other hand, I could see my baked onion tart was going to be a winner from the moment it was brought out. It had a thin, flaky, buttery pastry base (very much like a good croissant) which had been well cooked through – this is usually the main stumbling block of the savory tarts I am accustomed to seeing in the UK. The onions contained within the tart were rich and sweet, and when the poached egg was split open it revealed a lovely dense, deep yellow yolk which seeped into the onions and made the dish a very pleasurable and satisfying one. It was a rich and indulgent start to the meal, and I was surprised at how large the portion was, given that we were having the pre-theatre menu (not a bad thing!). 7/10. 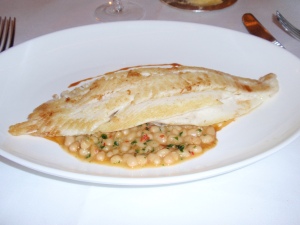 This was a very good plate of food indeed. The plaice fillets were quite substantial, which we were again pleasantly surprised by, given the half or two-thirds portions you often get with appended menus. The fish had been lightly dusted in flower and cooked in probably quite a bit of butter, which resulted in a very rich and luscious flavor. They say that plaice is the ‘sole of the poor’ and while it was not sole, it was certainly a very fresh fish that came pretty close to providing the same delicacy as a well executed sole dish. The beans worked brilliantly not only as an accompaniment, but also as a sauce. Mrs. LF commented that it was “…like a really good homemade dish, the kind of dish I would love to have the recipe for, as you could make it at home. It was very Mediterranean and very nice.” The only issue we both had with the dish was that it was slightly too salty and made us quite thirsty. 7/10.

As we still had quite a bit of time to spare, we conceived a clever plan for the last course: we made it into 2 courses! In other words, we decided we would split a cheese plate first, and then split a dessert. By this time, there were quite a few more tables present and seated, and the piano player had arrived, so things were into a fuller swing. 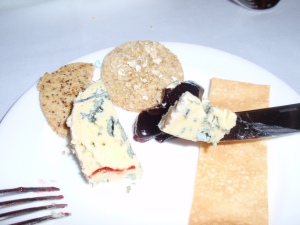 The cheese arrived and we divvied up the rations. It was an excellent rich English blue cheese that had a very smooth and buttery texture. The biscuits, which seemed to be homemade (I forgot to ask), were good, but the damson preserve was what I remember best. It had a very thick consistency and its purple sweetness was a perfect pairing with the sharpness of the blue cheese. The portion was perfectly sufficient for two people sharing, which again demonstrated the streak of generosity from the previous courses. 8/10.

The dessert was also rather large, which suited me just fine. It was three scoops of vanilla ice cream, with a good measure of honeycomb ‘crisps’ stuck into the ice cream. It came with a side sauce of hot fudge, which was made from a good quality dark chocolate. Like the meal so far (sans salad), it was simple but very good. The honeycomb was really crispy and made a good spoon for the ice cream and hot fudge. 7/10.

We had also decided to share a glass of sweet wine and, on the recommendation of the head waiter, we were served a 2007 Essensia Orange Muscat from the Andrew Quady Winery (not so cheap at £8.25/glass). It was a very memorable muscat, with lovely Seville orange on the palate and a nice slightly sticky texture in the mouth. I am a sucker for a good dessert wine and could have had another, but that would have been too greedy for a Friday night – and we had a haunted opera to visit.

This is a phrase more common to British than American English, and something I didn’t quite get in the first few years I saw it on my office birthday cards when I first arrived on this side of the pond. But it is particularly apt on this occasion as Le Caprice is someplace I will definitely return to in the future, and cannot imagine my time there being anything but happy.

Le Caprice is a classy place that hasn’t lost its little ‘je ne sais quoi’, despite recent changes to the kitchen and the fact that it is a bit of a dinosaur in the London dining scene. I like the simple design, the classic cuisine, the precise kitchen, the warmness and professionalism of the staff and the fact that you can eat comfortably at the pleasant bar counter.

It is often little touches that make the biggest difference, and the doorman with bowler hat, the piano man who has no written music and chats to regular customers while playing, and the polished front-of-house act help to make Le Caprice a restaurant at which I hope to have many happy returns with my friends and family…or just alone for a cheeky long lunch at the bar.

Wine Selected: 6/10 (loved the muscat but the Pouilly-Fumé didn’t do it for me)

*Note: I have dined at Le Caprice twice, once for lunch and once for dinner.*