Grill Ruby in Stockholm has lots of movie posters - in particular, a large one of Wim Wenders' film "Paris, Texas" - plus loads of buzz & ambience

I was in Stockholm last night due to a sort-of last minute emergency at work. From the end of 2008, going back about 3 years from then, I came to Stockholm on a monthly or bi-monthly basis as a result of my job. I have come to really adore Stockholm, and Sweden in general, over this time period. Some of the reasons for this include the general friendliness and openness of the Swedes, plus the fact that in Stockholm all of them speak near-perfect, if not perfect, English (at least in my line of work); the cleanliness; the charming Gamla Stan (Old Town) of Stockholm, plus its many other attractive neighborhoods such as Södermalm; the clean & fresh air and water everywhere; the relative under-population; but most of all, the fact that I don’t recall ever having a bad meal here. The produce is of a high quality, and they have the most amazing assortment of breads, which are all good in my book.

When in Stockholm, my evening stroll through the Old Town inevitably seems to lead to one destination when I am solo: Grill Ruby. As I headed off from my hotel on foot last night, I thought about my options for the evening. I was grateful to have been given the green light to abandon my clients (who were dining in our hotel – yawn…), and was looking forward to a well-deserved relaxing meal after what has to be one of the most stressful 7-day periods I’ve had in a good few years. Although I was considering Sally’s Bar, I knew deep down that my walk would end up at the door of the steakhouse-esque place that hasn’t failed me so far. I had to employ some quick spy tactics as just outside of Grill Ruby I saw two of my colleagues from London. I really didnt’ feel like talking shop, so I quickly did a 180° and ducked down an alley, hoping they wouldn’t see me. I was successful, and eventually meandered back to my chosen destination.

I am always slightly confused about the name of this place – I think the official name is “Grill Ruby”, but on their business cards and on their own barbecue sauce bottles, it says “Paris Texas”, so it is a bit confusing. Plus, there is the sister restaurant “Bistro Ruby” next door…? Anyway, I had arrived, and quickly took a seat at the bar – always the best bet when you are dining alone as it means you will normally have some ongoing interaction with the staff.

This is one of the best barbecue sauces I've had - sweet, tangy and with a slight hint of spice...I can't help but love it with my meat (I guess I am really American after all...). It is a shame you can´t buy it or take any back with you!

My brilliant waitress asked me if I had been here before, and I said yes. So she quickly told me that yes, I was a ‘regular’ and therefore didn’t mess around. She promptly asked me what cut of meat I was after, and then asked if I would like it medium rare with chili bearnaise sauce and a tomato salad on the side (2 sides are included in the price, and there are about 10 to choose from), to which I said yes. She then proceeded to recommend a glass of wine by the glass, which was a Californian Zinfandel I hadn’t had before, so again, “Yes, please,” I responded, as she genuinely said she loved it herself. The wine arrived, and I loved it too after only the first sip. It was a Bonterra Zinfandel from Mendocino made from organic grapes and came with a host of ‘green’ credentials. I couldn’t stop sipping it as I waited for my ribeye (my selected cut of beef). 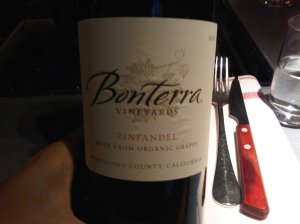 A wonderful wine to accompany a steak and salad: good red fruit with a hint of clove and a nice finish

My meal arrived, and I cut off the first slice of steak. To my disappointment, it had been cooked almost well-done (a first here, as it has always come cooked as requested in the past), and I had to send it back as it wasn’t even close to being medium. What I liked is that the waitress didn’t bat an eyelid, said it was the kitchen’s mistake, and told me I would get another, fresh salad (I was so hungry I had already almost demolished it by this point). Can’t imagine that happening at some London institutions, where you would at least get an eyebrow lift or some sort of push-back from the staff before admitting that something was actually wrong. She said I would have to wait a little while, but I wasn’t bothered. It came back about 10 minutes later and was perfect this time.

I asked her where they source their steak from (I had never bothered to ask before), and she said that right now they are getting their steaks from Germany, but that their lamb comes from elsewhere and that sometimes they get steak from Scotland – they just buy the best of what’s on offer at the time. In any case, I took my time with this steak as it was really delicious and satisfying, and also took my time with my second glass of Zinfandel :). 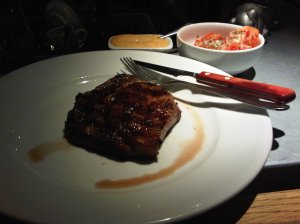 ...plus the tomato salad (with a zesty oil mixture, chopped onions and herbs) and chili bernaise (excellent, with a decent kick, but not too much)

As I had been so good (by not having fries or potatoes of any kind with my meat, you see), when the waitress asked me if I wanted to have a look at the dessert menu, the answer was a resounding “Yes, please” (again). I asked her if the pecan pie was any good, and she said it wasn’t her favorite, and to go for the crème brûleé. Given her accuracy so far, I didn’t object, and also didn’t resist her offer of a glass of Sauternes to accompany it. The brûleé came out a little while later, and she told me to wait for a minute or two as it would taste better once it settled and the top bit hardened. I obliged, and she was right, it was bloody excellent. The wine went well with it and I was getting a little dizzy by this point, having not eaten much during the day and being a wussy lightweight with alcohol.

I passed on coffee, as I want to sleep well for an early start the next day. I paid up, thanked the waitress for a lovely meal, and walked off (not quite in a straight line), teetering back towards my hotel. In my mind, I was thanking this lovely restaurant and city for making my trip here truly worthwhile, as without this evening, it would have just been a stressful, feckless 2-day tour of Stockholm’s finest meeting rooms.

I bid you adieu with a few shots of the bar…

If you are ever in Stockholm on your own and are a carnivore, I suggest you make your way to Paris, Texas / Grill Ruby (NOT Bistro Ruby – I have never been), and sit at the bar. You should have a good meal and a good time.

One half of the bar - they have some very decent spirits too...for instance, a 16-year old Lagavulin

The bar had emptied by the time I left...but thank you Grill Ruby for giving me a bit of pleasure in this fair city and making my otherwise hellish day something to remember...goodbye...for now

PS – I was a little bit too much the worse for ware to give the restaurant an official rating on this occasion, but it is a solid 7/10 in general given my past experiences.

*Note: I have dined at Grill Ruby 5+ times over the years.*

3 thoughts on “Grill Ruby – Always a Good Choice in Stockholm”